The car was serviced by Don Burns Porsche and then Rusnak Porsche of Pasadena as verified in the stamped Porsche Maintenance Record book. The book shows the car being purchased by Mr. Shore on 07/05/1974 with 21,860 miles having been recorded. There are additional stamps in the book and a notation that the engine was rebuilt on 02/07/1983 with 68,700 miles recorded.

The car was then believed to be sold to Brad Holden of Santa Barbara California and remained in his possession until his passing in the late 1990’s. Under Mr. Holden’s ownership, he performed a color change from it’s original Red Metallic color to Black. The engine was rebuilt in August of 1999 when it received 2.2 S Pistons, 2.2 S Camshaft, Carrera 2 Oil Pump, new Rod and Main Bearing sets, new Case Studs, Clutch Kit, Pilot Bearing and so on. The cost just for the engine rebuild in 1999 exceeded $12,500.

Shortly after Mr. Holden restored and modified the 914-6, he passed away. In April of 2005 the next owner, Albert Eichstaedt, a well known architect in Santa Barbara purchased the car from Mr. Holden’s estate where had been sitting since 1999. Mr. Eichstaedt had Schneider Autohaus of Santa Barbara perform a Pre-Purchase inspection with miles noted as 99,037.

Schneider Autohaus noted on their inspection report that was performed on April 13th 2005, that the original matching numbers engine was rebuilt to 2.2 S specifications and that it showed little or no use since that rebuild. The car was noted to have Bilstein struts and shocks and a larger front sway bar. The color change was noted and a comment was made that it was ” A VERY NICE JOB “.

Mr. Eichstaedt continued to maintain the 914 with Schneider Autohaus performing all required services and preventive maintenance until 06/09/2008 when he sold the car with 110,000 miles to our client here on the East Coast. The detailed service documents will accompany the car with it’s sale.

Our client is a well known collector and Vintage racer ( a pretty hot shoe by the way ) who has a large collection on both Coasts of the US. The 914 was fully serviced and maintained by a highly respected service and restoration facility in Connecticut.

Prior to our client entering the New England 1000 , a Vintage Car Rally, it received a thorough going through and service. Since the 1K tour, the car received all scheduled normal maintenance.

In 2018, the 914 received a major service along with a starter rebuild, new flywheel, clutch fork, throw out bearing, CV boots and an engine reseal. The total invoice for it’s last and most recent service was $5,457.46.

The 7 inch by 15 inch Factory Fuchs alloy wheels are in excellent condition and compliment the car perfectly. The Yellow front fog lamps look just right as do the European H4 headlamps that are installed.  Turned Aluminum kick panel protectors have also been fitted. All the chrome is in excellent shape and the car remains in top driving condition.

Now is your opportunity to acquire an excellent, well sorted, tastefully modified, performance enhanced 914-6 that is ready to provide years of driving enjoyment.

The car comes with all the original keys including the original key card displaying the HC code as well as the original stamped service book and original owners manual in the red Porsche cover. Also included is a battery warranty from Porsche/Audi to the original owner, WD Wiley dated 02/23/1972. The documented history confirm the miles shown and the care that this car has received since new. 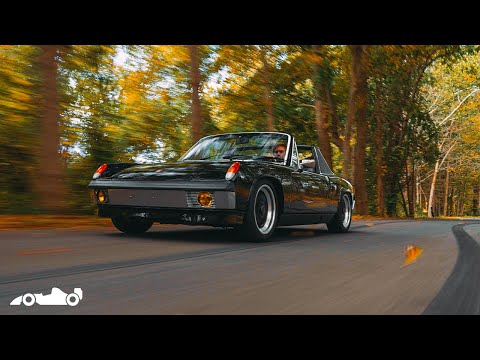