1991 Porsche 911 ( 964 ) Turbo finished in Black with Black leather interior. The 964 Turbo is powered by a turbocharged 3.3-liter flat-six mated to a five-speed manual transaxle and a limited-slip differential.

The recent service included replacing the front brake pads and rotors in addition to bleeding the brake system.

This 964 Turbo shows 56k miles and is now offered with service records and a tool kit.

Introduced in 1990, the 964 Turbo featured widened bodywork when compared to the standard 964 as well as aerodynamic side mirrors and a fixed rear spoiler. This example is finished in Black (L700) and features front fog lights, a power sunroof, a rear window wiper, and dual exhaust outlets.

Porsche Cup 17″ wheels are mounted with Continental ExtremeContact DWS tires measuring 205/50 up front and 255/40 at the rear. The Turbo features uprated brakes compared to the standard 964, including larger calipers and cross-drilled rotors at each corner.

The turbocharged 3.3-liter flat-six was factory rated at 315 horsepower and 332 lb-ft of torque. 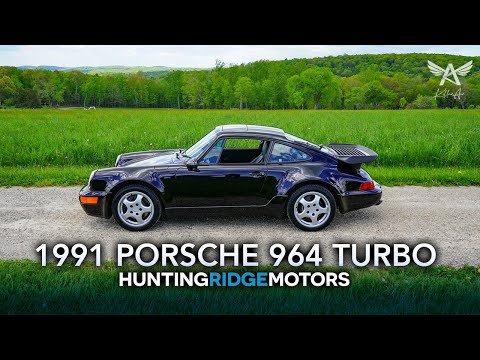